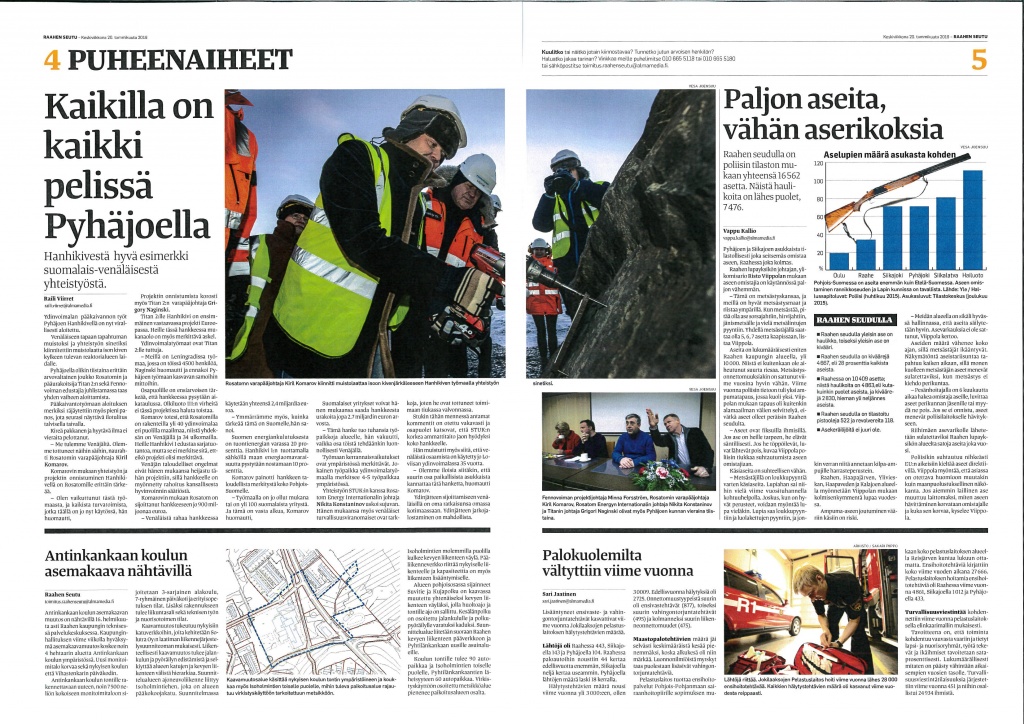 Hanhikivi is an excellent example of the Finnish-Russian cooperation.
At the Cape of Hanhikivi in Pyhajoki, ground excavation works have been officially started. According to a Russian tradition, as a sign of this event, an event took place with installation of a memorial tablet on a rock located close to the future reactor building.

On Tuesday, a high-rank delegation of representatives of Rosatom, General Contractor “Titan-2” and Fennovoima arrived in Pyhajoki. In honour of start of the next stage of works, a symbolical explosion was made and then the winter sky was illuminated with a spectacular salute.

Hard frost did not frighten the visitors. “We are from the Russia and we are used to such weather”, - said with a smile the First Deputy Head of “Rosatom” Mr. Komarov. According to him, the success of the joint “Hanhikivi” project is very important for “Rosatom”. “The construction site and the accepted security measures make a strong impression already at this stage», - he said.

Importance of success of the project was also emphasized by the Chairman of the Board of Directors of Holding, Mr.Grigoriy Naginskiy. “Hanhikivi” project is the first project in Europe for the company. Participation in such a project is an important step for “TITAN-2”.

Construction sites of nuclear power plants are more than familiar for “TITAN-2”. About 4500 persons are working at the construction site of LAES-2 NPP, -noted Mr. Naginskiy and assumed that the same quantity is expected in Pyhajoki.

Compliance with of the planned schedules is a task of vital importance for all parties of the project. Errors of Olkiluoto-3 will not be repeated in this project.

Mr. Komarov reported that at present “Rosatom” is executing construction of more than 40 nuclear power plants worldwide. Nine of them are under construction in Russia, 34 - abroad. For “Rosatom”, “Hanhikivi” is a part of batch production, but it does not undermine the value of the project.

The economic crisis has not impacted the project, because financing is provided from the National Welfare Fund. According to Komarov, “Rosatom” has already invested900 million euro in the project. In total, 2.4 billion euro will be invested from Russia.
- We understand how important it is for Finland. About 20 % of all power supply in Finland is provided by imported energy. The energy produced by “Hanhikivi” NPP will help to reduce this value to 10 %.

Mr. Komarov emphasized economic gain of the project for the whole Northern Ostrobothnia region. - About 100 Finnish companies are already working on the site, and that is only the beginning.

As he said, the volume of localization for the Finnish companies will be about 2.7 billion euro. The project will provide workplaces for thousand persons, even taking into account that a part of works will be will be executed in Russia.
Influence of the project on the region will be considerable, each workplace on the construction site results in occurrence of 4-5 workplaces in other spheres.

The Head of “Rusatom Energo International”, Nikita Konstantinov, is sure that cooperation with STUK will go smoothly. As he said, the Russian supervision bodies are not less demanding, and “Rosatom” has a long successful experience of cooperation with them. All comments of STUK are reviewed and considered very carefully, all parties are assured that high professionalism of STUK is very useful to the project.

Mr. Konstantinov also reminded that Russia and Finland has already more than 35 years of experience of cooperation in the field of nuclear industry at Loviisa NPP.

“We are very pleased with fact that the majority of local population supports the project, - noted Mr. Komarov.

The Russian party has experience of handling of spent nuclear fuel in the country. There is a possibility to reuse the wastes.